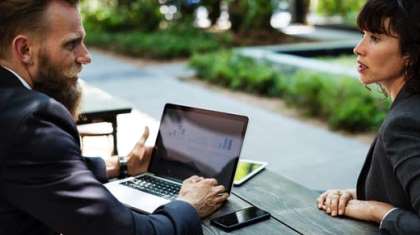 With 2018 now underway, many Australians may have noted ‘pay increase’ in their new years’ resolutions list. While the economic conditions over the past few years may not been ideal for having successful conversations with your boss around remuneration, MLC’s Senior Economist Bob Cunneen explains how changing economic factors could lead to an improving environment for pay rises.

Nominal wages growth is the slowest it’s been in 20 years. This is despite a number of strong economic indicators in the past year including a dramatically improved Australian labour market and employment growth running at its fastest pace since 2008 with 3.3% annual growth.  Also, the unemployment rate has fallen to 5.5% which is the close to its lowest level since 2013. So why are pay rises as common as finding a Tasmanian tiger barking in the bush?

There has been a shopping list of explanations given for this “wages woe” by commentators and economists. The most frequently cited reasons are the elevated level of unemployment which is also known as “spare capacity”, “job insecurity” and the longer-term challenges of “globalisation and technology”.  All three factors can be considered inter-related.  If an individual is insecure about their job given the level of unemployment as well as globalisation and technology putting pressure on their job security, it doesn’t provide much support for an increase in pay.

How are wages measured? – “Just tell us the price”

Australia’s nominal wages have been measured every which way with acronyms to astound and confound. Fortunately there is one standardised measure that Reserve Bank of Australia (RBA), Federal Government and financial markets focus upon. This is the “Wage Price Index”. This Wage Price Index (WPI) measures nominal wages to ensure “a constant quantity and quality of work performed”. The Wage Price Index is adjusted for different levels of hours (“quantity”) and skills employed (“quality”). 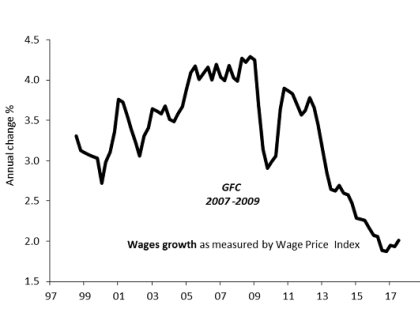 The Wage Price Index has only recorded 2% annual growth in the year to September 2017. This is essentially the slowest pace for wage gains since this measure began in 1997. Wages growth is now lower than the experience during the Global Financial Crisis (GFC) from 2007 to 2009.

The RBA Governor Dr Philip Lowe is concerned about this slow wages growth, calling it a “major priority” for understanding. Slow wages growth is a major contributor to both the “low inflation” and “high asset prices” which is currently perplexing central bankers.1

Australia’s unemployment rate is cited as a key measure of “spare capacity” in the labour market. The unemployment rate calculates the percentage of the available workforce that is out of work. As the theory goes, the more unemployed Australians, the less pressure on wages as people compete for available jobs.

Actually the unemployment rate is a debateable measure of “spare capacity”. If you work for more than one hour, you are considered employed. So what happens if you are “underemployed”. You could be a part time worker who would like to work additional hours but do not have the opportunity. According to the ABS, Australia has an underemployment rate of 8.3% at November 2017.

The underutilisation rate when turned upside down in the following chart (red line is inverted) is highly correlated with wages growth (black line). This suggests that the higher the percentage of Australians that are underutilised, then the slower the wage growth. 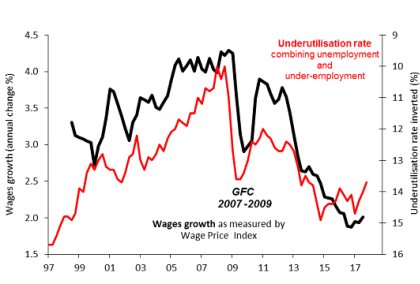 The RBA Governor, Dr Phillip Lowe, recently suggested that workers’ concern over globalisation and technology may also be restraining wages noting the possibility that “workers feel a heightened sense of potential competition, either from advances in technology or from international competition” in curbing their wage demands.

So has this ‘brave new world’ of integrated global supply systems and machines impacted on wage growth? Currently the evidence is more anecdotal than statistical, so the jury is still out. However let’s briefly consider what can be called the “Rage against the machine at the checkout” as a prime anecdotal example of both globalisation and technology weighing on wages growth.

The arrival of Germany’s ALDI into the Australian supermarket industry shows globalisation at work. ALDI has become a key competitor to Coles and Woolworths and uses its lower-price model as a differentiator. The “advances in technology” are also now evident in the recent introduction of “self-checkout” scanning machines by Coles and Woolworths.  Now consider yourself a cashier employee in any Australian supermarket. Do you have the bargaining power for higher wages given the greater competitive pressures and technological advances that now prevail?

Since the GFC began in August 2007, the spectre of job cuts has loomed like a black cloud over the workforce.  Both the corporate and public sectors have been seeking “efficiency dividends” from employees. Given this plague of management euphemisms about “cost control”, “downsizing”, “rebalancing” and even “rightsizing”, it would be rational for employees to worry about their jobs.

While “job insecurity” may not be exactly measurable, the Melbourne Institute conducts a survey that canvases consumers’ expectations for unemployment. Notably unemployment expectations has seen some sharp movements over the past decade, as seen in the chart below. 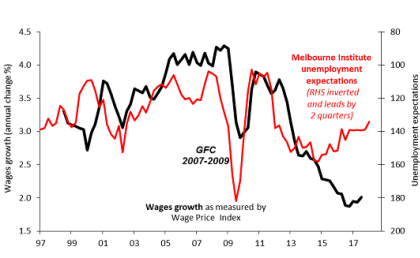 
But there is light on the horizon

Fortunately for those in the workforce there are some signs that unemployment expectations are now getting better, rather than deteriorating further into fear and loathing. The Melbourne Institute survey measure (previous chart) has now fallen to its lowest level since 2011. Another alternative measure is NAB’s Consumer Anxiety Index which also shows that stress over job security has fallen to its lowest level for the past five years.

Indeed these diminishing survey responses for ‘unemployment expectations’ and ’consumer anxiety’ suggest that employees are coming to terms with the challenges from spare capacity, globalisation and technology. We now seem to be becoming less fearful. Stronger jobs growth over the past year appears to be turning the tide in favour of more bargaining power for employees. This is a particularly welcome development for consumer spending as a moderate rising tide of wages growth should lift the economy’s growth performance. So there are now some hopeful signs for wages growth and that elusive pay increase may not be as far away as you think.

MLC believes that the information contained in this communication is correct and that any estimates, opinions, conclusions or recommendations are reasonably held or made as at the time of compilation. However, no warranty is made as to the accuracy or reliability of this information (which may change without notice). MLC relies on third parties to provide certain information and is not responsible for its accuracy, nor is MLC liable for any loss arising from a person relying on information provided by third parties.

MLC may use the services of NAB Group companies where it makes good business sense to do so and will benefit customers. Amounts paid for these services are always negotiated on an arm’s length basis.