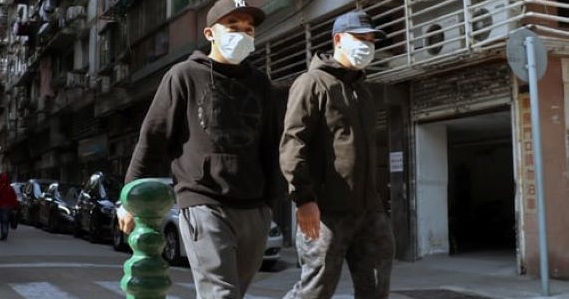 The coronavirus outbreak — which began in December in Wuhan, an 11 million people strong city that is the capital of China’s Hubei province — has seized the world’s attention.

Chinese President Xi Jinping has described it a “grave situation” and Chinese state television has reported a death toll that has hit 6181 at the time of writing.

Though China is suffering most, there are global knock-on economic effects stemming from the fact that China is integrated into international supply chains.

China has a much bigger role in these networks than it did at the time of the last major health problem that emerged from the country — the severe acute respiratory syndrome (SARS) virus 17 years ago. For instance, China is an important supplier for the global motor industry and electronics sector.

Investment markets too have been disturbed with the Chinese share market, as measured by the CSI 300 Index, having fallen sharply (Chart 1) over the past month.

The SARS outbreak, which commenced in November 2002 with the first reported case in Guangdong, and which ‘ended’ in July 2003 when the World Health Organisation (WHO) announced the removal of travel alerts, provides the nearest ‘compare and contrast’. 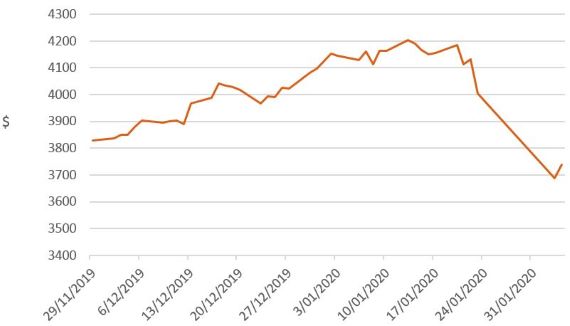 Measured against the roughly eight-month timeline of the SARS crisis, the coronavirus emergency, now in its third month, would appear to be at an early stage, from an investment perspective. Like the current situation, the Chinese share market dived in the early stages of SARS before making its way back towards pre-crisis levels (Chart 2). 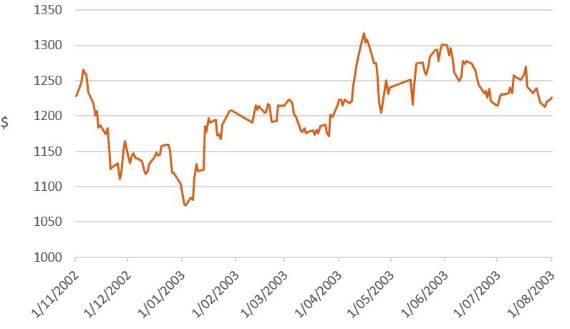 Trying to draw conclusions for how the coronavirus may affect Australian companies by looking at SARS is fraught. There’s a natural human desire for clear-cut answers, but that’s not always possible when putting industries or companies under a microscope.

Rather than going through sector-by-sector, in this note, we’ve chosen to touch on international travel related stocks, as well as education providers.

In its 2003 annual report, Sydney Airport commented that the period, including the SARS crisis, was “one of the most difficult trading periods in Sydney Airport’s history.” However, the share price showed little signs of a SARS-impact (Chart 3). 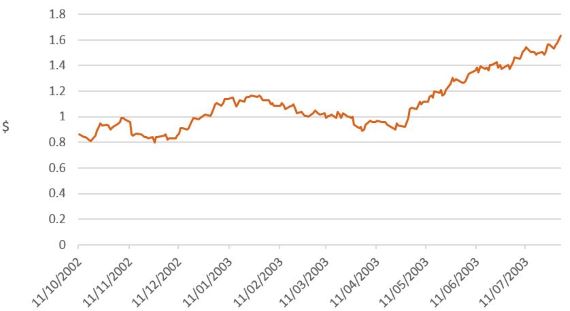 To be clear, Sydney Airport’s business environment, today, is very different from then. China didn’t even rate a mention in the company’s 2003 annual report, but Ansett’s name appeared 11 times!

Moreover, in 2003, Chinese tourist numbers to Australia were still relatively small. By 2018, however, China was the source of 1.43 million tourists to Australia and they spent a massive A$12 billion while here.2 Clearly, the Chinese visitor market has now become very important to Australia’s tourism-related industries and companies, such as Sydney Airports.

With that context, the Australian government’s announcement that no Chinese travellers can come into Australia unless they are citizens or permanent residents and their families, and Qantas’ indefinite suspension of flights to China, has hit Sydney Airport’s share price hard (Chart 4).

Chart 4: …but coronavirus has hit the company’s share price 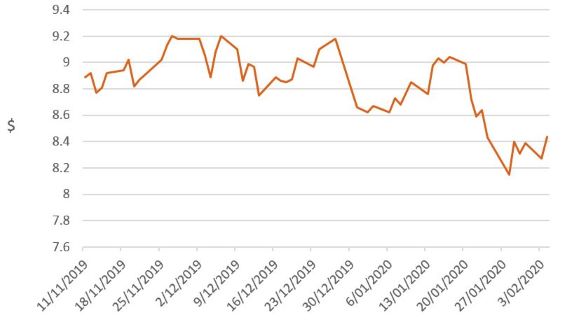 The situation for airlines too is different between 2003 and now.

Back then, Virgin was not a listed stock in Australia, and while Qantas’s weakened share price looks (Chart 5) like the best barometer of the SARS impact – with SARS mentioned 16 times in Qantas’ 2003 annual report – company management attributed the share price fall to tensions in Iraq and terrorism, following the Bali Bombing. 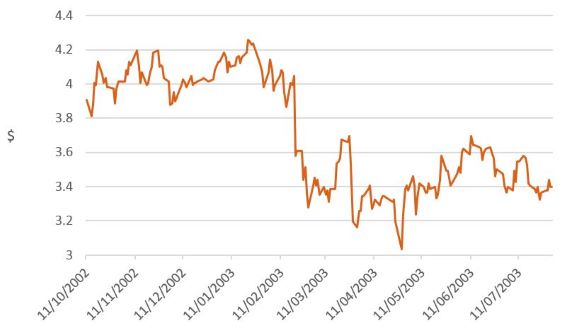 While airports, and airlines are an obvious point of concern around the coronavirus – both have natural offsets.

We believe the recent decline in bond yields (rising bond prices) provides some support for Sydney Airport given the company’s relatively high gearing levels, and the fall in the oil price cushions Qantas, to some extent, against coronavirus-related revenue declines (Chart 6). 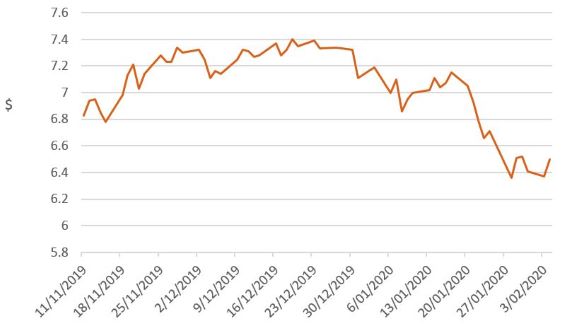 Finally, Chinese students have become increasingly important to Australia’s education sector over the past two decades. About 150,000 Chinese nationals are enrolled at Australian universities, making up around 11% of the student population – a far greater proportion than in Britain and the United States, which came in at 6% and 2% respectively.3

A government task force has estimated an $8 billion loss4 if Chinese students cannot enrol for universities following the summer break.

Another way of unpacking the situation is by looking at the share price hit suffered by IDP Education (Chart 7), a Melbourne-headquarted company offering placement and testing for foreign students.  Like most education providers, the company has high fixed costs and with around 25% of FY19 enrolments being from China, the travel restriction is damaging IDP Education’s revenue outlook. 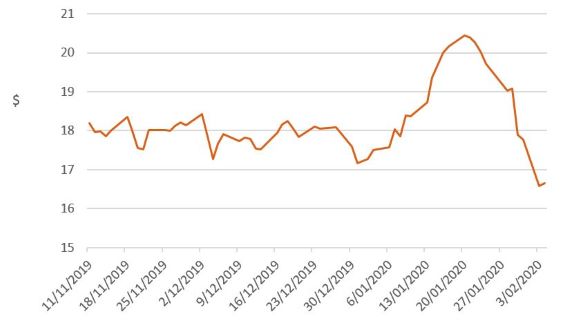 In a speech in January last year, President Xi Jinping told officials to be on high alert against “black swan” and “grey rhino” financial events in the face of a slowing economy.5

He probably didn’t expect that a pandemic starting in China would make his warnings comes true. For investors, it again emphasises the complexity of the contemporary environment.

When positioning our MLC Wholesale Inflation Plus, Horizon and Index Plus portfolios, we consider the impact disease outbreaks can have on returns — it’s one of the 40+ scenarios we’ve had in our Investment Futures Framework for more than a decade.

Before this recent outbreak, our multi-asset portfolios were defensively positioned as we have been concerned about heightened valuations in many asset classes. While we don’t see cause for significant changes to our portfolios yet, the situation will evolve and significant price changes can open up investment opportunities. Our investment experts, as always, will continue to closely monitor and manage the potential impacts of the coronavirus and other risks on our portfolios.

This communication is provided by MLC Investments Limited (ABN 30 002 641 661, AFSL 230705) (MLC), the Responsible Entity for the MLC Wholesale Inflation Plus, MLC Wholesale Horizon and MLC Index Plus portfolios, and is a member of the National Australia Bank Limited (ABN 12 004 044 937, AFSL 230 686) group of companies (NAB Group), 105–153 Miller Street, North Sydney 2060.  MLC is not an authorised deposit-taking institution and NAB does not guarantee or otherwise accept any liability in respect of any financial product referred to in this publication.

The information in this communication is general in nature and has been prepared without taking account of individual investors’ objectives, financial situation or needs and because of that investors should, before acting on the advice, consider the appropriateness of the advice having regard to their personal objectives, financial situation and needs.

You should obtain a Product Disclosure Statement (PDS) relating to the financial products mentioned in this communication issued by MLC Investments Limited, and consider it before making any decision about whether to acquire or continue to hold those products. A copy of the PDS is available upon request by phoning 132 652 or on our website at mlcam.com.au.

Past performance is not a reliable indicator of future performance. The value of an investment may rise or fall with the changes in the market. Any projection or other forward-looking statement in this document is provided for information purposes only, and no representation is made that they will be met. Actual events may vary materially.

Opinions constitute our judgement at the time of issue and are subject to change. Neither MLC Investments Limited nor any member of the NAB Group, nor their employees or directors give any warranty of accuracy, not accept any responsibility for errors or omissions in this publication.